As part of my Character Development module at uni, I've had to create and design a character and animate a minute of line tests. Hope you enjoy the result!

So we're back from the Encounters International Film Festival 2010. The event - held at the Watershed Media Center in Bristol - was a fantastic weekend of film, animation and networking.

Myself and the other students behind 'TAP' set off for Bristol early Saturday morning and made our way to the venue. We were all made to feel very welcome and given a schedule of events. It wasn't long before the DepicT! shortlist was screened to a large audience. All the films seemed to be well received and a short Q&A session was held afterwards. It was great to talk to the other film makers who had been shortlisted, who included professional animators and students.

After the screening, we were invited to the DepicT! Happy Hour... and with free Orchard Pig cider on offer, I was very happy! After a few drinks and chatting with those who had enjoyed our film, we were interviewed on camera about our film. It was a great feeling to be chatting with like minded people about our work.

A personal highlight of the weekend was meeting Nick Park of Aardman Animation. Having loved his work since I was a child, this was a great and surreal experience! He kindly chatted with us and had a photo with us.

Although we didn't win any of the DepicT! prizes, we were very happy with being shortlisted and given the opportunity of attending a well known and exciting festival.

Thank you to everyone at Encounters and Depict!
Posted by Andy at 20:31 No comments:

Here are some more of the animation me and and group have made for our Innovative Animation module at Wolverhampton University.


An unsuspecting student gets more than he bargained for when tucking into a packet of Doritos! Created using pixelation method.


An elderly man sits in his home on a cold winter's night. Made using card backgrounds, objects/character on layered glass.


Footage of a man drinking tea worked on top of using Corel Paint 11.


Encounters Film Festival is this weekend, so a full review of that will be on the way soon after! Keep on commenting on our entry in the Depict! showcase at www.depict.org/2010/tap/
Posted by Andy at 21:36 No comments:

A film by Andrew Edwards, Patrick Fowler and Thomas Massey from the University of Wolverhampton has been selected into the competitive screenings of the Encounters International Film Festival – one of the world’s best-known and best-respected celebrations of animation and films under 30 minutes duration.

To achieve a place on the final shortlist for the festival, Andrew, Patrick and Thomas’s entry “TAP” had to impress a panel of judges who saw a total 1,600 entries from 63 countries. The film now goes into the next round of judging, that takes place during Brief/Animated Encounters 2010, a five-day festival of screenings, talks, workshops, master-classes and celebrity visits happening in Bristol, UK, from 16-21 November, and which offers prizes worth a total £12,000.

Liz Harkman, the festival’s managing director, says: “This year due to the relaunch of our Brief and Animated Encounters competitive strands and our three new awards, we’ve seen a huge increase in not only the volume but also quality of the films submitted. Over 200 films have been selected from 1600 entries from a staggering 63 countries. From now, only our international jury can decide which film-makers will win the major prizes but no matter what they decide, the work of every finalist will be seen by film buyers and talent spotters from many parts of the world, and enjoy all the benefits such a showcase brings.”

Animator Andrew Edwards, on behalf of the group, says: “This a fantastic opportunity for the three of us as animation students and we’re very excited that our film has been chosen. Thank you to everyone at DepicT! and Encounters!”

For more details about the Encounters 2010 programme, the festival’s judges and supporters, the prizes on offer and how to book a place or receive the results, please see:
http://www.encounters-festival.org.uk/ 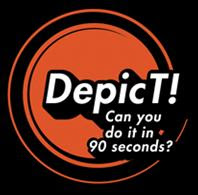 This is a short sequence based on the Three Little Pigs tale. Made using card and paper and shot under a camera. We looked at the work of Lotte Reineger and were asked to use similar methods to animate a fairy tale sequence. As part of my Innovative Animation module at Uni. Not perfect, but quite happy with the result :)

Well, I've just had some exciting news regarding our TAP film... I've been advised not to announce anything as yet, but I'm very happy... more soon...
Posted by Andy at 22:32 No comments:

Ah, what a summer. Seeing Iron Maiden twice (once at Sonisphere Festival UK and again on Bruce Air Italy), meeting Bruce Dickinson, having a lot of fun and meeting some great people along the way... things I'd been waiting for for almost 7 years. But still, I'm really looking forward to the return to University!
Expect more updates soon as I attempt to get my brain thinking creatively once again...
Posted by Andy at 13:32 1 comment:

Last night I attended Telford's 2nd annual Film Festival at Oakengates Theatre. A pleasant evening with 14 short films shown including work from primary schoolers, college and university students and of course, my own film "Tap". The film seemed to be enjoyed by all and it was a great feeling to have my work shown to a large audience like this for the first time. All the filmmakers received a prize of chocolate and a £20 voucher. Hopefully the film will also do well elsewhere. Thankyou to Telford Culture Zone and Telford Film Festival :)

http://www.telfordculturezone.com/events/telford-film-festival
Posted by Andy at 17:04 No comments:

Well well. I've been posting and submitting the 'TAP' film around various sites and competitions and I've just received news that the Telford Film Festival has shortlisted the film into its 12 film showreel! Quite chuffed at that :) The event takes place at Oakengates Theatre (The Place) in Telford on Tuesday 15th June. Should be a good night! I'll let you know...

http://www.telfordculturezone.com/events/telford-film-festival
Posted by Andy at 17:41 No comments:

As I mentioned a few days ago, myself and some other Animation students at the University of Wolverhampton decided to make a short film to practice our skills and for entry into various competitions/festivals. Hope you enjoy.

"'Tap' is a short film made by three first year animation students (Andy Edwards, Patrick Fowler and Tom Massey) at the University of Wolverhampton. As the three 'tap' into their ideas, they're brought to life before them."
Posted by Andy at 16:27 No comments:

An upcoming short film made by myself and three other Animation students at the University of Wolverhampton.

I'm a huge fan of Neill Blomkamp's "District 9", and after seeing some concept and fan art I was inspired to have a go at some drawings of the alien characters myself. 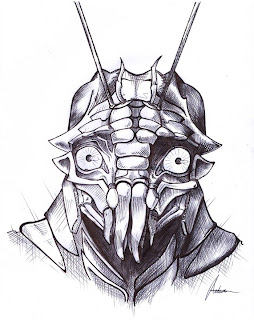 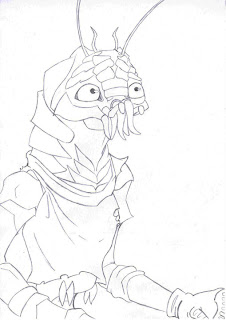 After many problems (I hate Autodesk Maya!), here are my finished Push and Pull animations.

For my 'Animating the Human Form' module, I've had to do some life drawing and sketches. Here's a pick of my favourites: 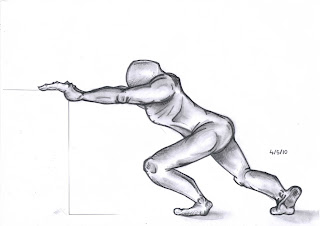 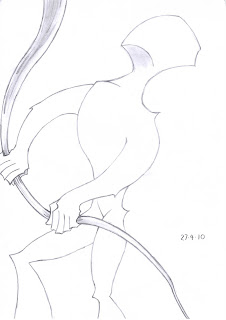 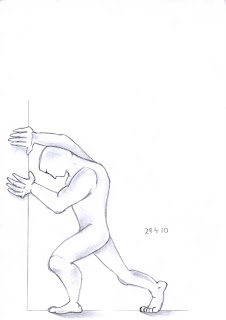 I've been a fan of the Halo games for a while and love the games and characters. Here's a pencil sketch of Master Chief. 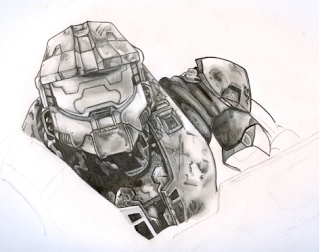 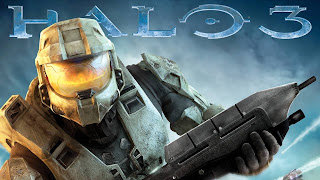 For my 'Pre-Production and Planning' module, I had to create an animatic for a planned short film. The animatic needed to tell a whole story clearly and carry a narrative... I chose to make mine about a man losing his 'winning' lottery ticket.

For my 'Editing Theory and Practice' module, I had to create a short 'art film'. I decided to collect some old and quirky footage and put it to a song. After collecting some footage, I decided to use Die Apokalyptischen Reiter's 'Seemann'.

Walk cycle for my 'Animating the Human Form' module. I took the look of the character from an elderly man I spotted at the Mander Centre in Wolverhampton.

For my 'Animating the Human Form' module, one of the tasks was to create a short lip sync. For my first attempt, I used ToonBoom to create a lip sync of a Forrest Gump quote.

... and for my final piece, I just had to use a Back to the Future quote!

Welcome To My Blog!

Andy
Animator from the West Midlands. I keep this blog up to date with sketches, concepts, video and other goings-on in my work. I hope you enjoy! Email me @ AndyEdwards747@hotmail.co.uk